The 311th Chapter of the Order of the Holy Cross

This past week nineteen Brothers of the Order of the Holy Cross met together in annual chapter at the monastery. It was the first time we got to do this in person again since 2019.

We also welcomed Br. Ignatius Martin, OSB/Cam, a Camaldolese Brother from Big Sur, CA. He was a keen and sympathetic observer and participant of our proceedings and preached on Trinity Sunday. We have had a covenant relationship with the Camaldolese Benedictine Order for decades.

The Holy Cross Brothers came from Canada, South Africa and the US. We had both formal meetings for the business of running our Order and lots of informal times in small and larger groups to further the bonds of brotherhood we have. On Saturday, we picked-up Br. Laurence at his nursing home and brought him to the monastery to enjoy the wider company of his Brothers. You can see him in the center of  the group photograph below (credit: The Rev. Janet Vincent).

At mass, on Saturday we celebrated the internship of Mr. Eric Anthony. He will leave us on Monday. He will start law school in Washington, DC, this coming academic year. He has been a great person to live in community with. We wish him success in his new endeavors.

This blogger (Br. Bernard Delcourt) will leave Monday on a three-month sabbatical. As a result, the Monastery Colum will be on a hiatus until late September. In the meantime, you can continue to follow us on Facebook at https://www.facebook.com/holy.cross.west.park and on the individual pages of several Brothers (Bros. Robert James, Robert Leo, Randy and Josép).

Br. Bernard will be doing a Thirty-Day Spiritual Exercises of Saint Ignatius of Loyola retreat in Gloucester, MA, in July and will be doing a walking pilgrimage on the Camino de Santiago in Northern Spain in August and early September. The readers of the Monastery Column will be in his prayers.

Leaving you for the summer with a blooming report:

Posted by Br. Bernard Delcourt at 1:30 PM No comments:

Cookout and preparing for Annual Chapter

Little by little Holy Cross Brothers from other locations converge on our monastery in view of the Chapter meetings that will take place here next week. Br. Adam McCoy has arrived from Cathedral City, CA, and Bros. Daniel Ludik, Roger Stewart and Scott Borden have arrived from Hermanus, South Africa.

This coming Monday will see the arrival of Toronto Brothers and the much awaited return home of Br. Josép from his time in Rome and Assisi at the Monastic Formators Program.

This past Monday, we kept to tradition and had a Memorial Day cookout organized by Br. Aidan and grilled to perfection by Br. Randy.

Following are pictures of the monks busy at ancillary functions. They happen every week , are indispensible to our health and well-being, but don't get much press.

And of course, this blog entry needs a blooming report. Iris blooms are on the way out. It's the turn of roses and peonies to take center stage.

If you will, keep us in your prayers, as we assemble in Chapter for discussions and decisions regarding our beloved Order of the Holy Cross.

Balmy days of May

Just one more week until Br. Josép is back from Italy.
This coming week, Brothers from other houses will start arriving for the Annual Chapter of the Order of the Holy Cross.
This past week Br. Ephrem got the visit from a good friend, from New Orleans, Ms. Jenny Hiel. It's important for friends to see new members of the community in their new environment.
The peonies have started to bloom. The irises are still going strong. What beautiful grounds we have.

Posted by Br. Bernard Delcourt at 3:14 PM No comments:

Learn More About Us 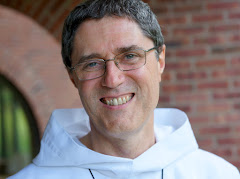 An Episcopalian Benedictine monk in the Order of the Holy Cross since 2004.

He made his life profession of the Benedictine Vow in November 2009. Br. Bernard is a citizen of both the United States and Belgium. Before entering the monastery, he was a banker and then a life skills and business coach. Currently a spiritual director, he also serves Holy Cross Monastery in administrative and financial capacities.